SPACE POLICE - THE EARBOOK-EDITION!
Soon the wait will be over: On April 18th the new Edguy album "SPACE POLICE - Defenders Of The Crown" will hit the stores. It will be available as a standard CD version, a 2-CD digibook and a huge hardcover earbook version that is strictly limited. The 28,5x28,5 cm Earbook edition will be available at a few chosen dealers including Amazon (click on the advertisement on the left) and at Nuclear Blast's online store. Here you can have a look at a few pages of this beautiful piece of art that will surely be a rare and sought after collector's item in no time. Or as the band puts it: "We're so proud of this book, we've put the photos together ourselves, and it is a tribute to art, our history and most importantly haptic perception, a feeling we have to nourish and cherish in the internet age." In the book the collector will find song lyrics, illustrations, explanations and background stories about each song, more than 130 photos portraying the band's history, the history of the band in words, and a list of all dates EDGUY have ever played.

NEW ALBUM: HERE'S YOUR COPY WITH ORIGINAL AUTOGRAPHS!
In a few days (April 18th) the new EDGUY album "SPACE POLICE - Defenders Of the Crown" will be released (UK April 21st, North America April 29th). At Saturn online (Ger) you can order a limited number of 2CD-versions that come with a special autograph card, hand signed by the band. Click here to have a look!
Share

LISTEN TO EXCERPTS OF A NEW SONG
On April 18th EDGUY's new album "SPACE POLICE - Defenders Of The Crown" will be released (UK April 21st, North America April 29th). The first single "LOVE TYGER" has already been released and is available as a digital download single. Below you can listen to an excerpt of the album's epic, the 9-minute anthem "THE ETERNAL WAYFARER".

NEW ALBUM "SPACE POLICE" GETTING BEST REACTIONS EVER
On April 18th the new EDGUY album "SPACE POLICE - Defenders Of The Crown" will be released (UK April 21st, USA April 29th). Before they left the studio EDGUY themselves confidently announced that they would deliver the heaviest album ever, in interviews Tobias often speaks about how they let their instincts take over in the songwriting and how powerful and fresh this album sounds. And obviously EDGUY delivered: Japan's prestigious Burrn!!-Magazine gave the album the best scores the band has ever received in Japan. In Rock It-Magazine the album went to #1 of the soundcheck. The biggest Rock-radios in Germany have begun to play the first single LOVE TYGER on heavy rotation. In a few days the first video clip for the album will premiere online. We'll keep you posted. If you haven't pre-ordered your limited edition yet, click on the banner on the left to have a look!
Share

MORE TOURDATES CONFIRMED - EDGUY RETURN TO CZECH REPUBLIC
On April 18th the new EDGUY album "SPACE POLICE - Defenders Of The Crown" will be released. In September the band will embark on the SPACE POLICE WORLD TOUR. The tour management has just confirmed the band's return to the Czech Republic, headlining the Winter Masters Of Rock on November 22nd. Please also note that there is a venue and date change in Paris. Also Bordeaux has been added to the tour dates as well, check the tour section for details!
Share 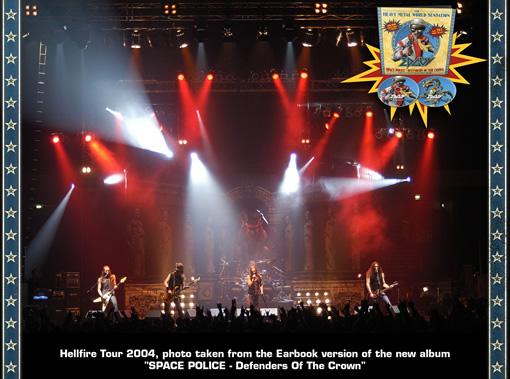