CHECK OUT THE FIRST NEW EDGUY SONG
On April 18th EDGUY are going to release their new album "SPACE POLICE - Defenders Of The Crown" ("Their best album - nearly in a decade!"- Rock Hard Magazine). Here is your world exclusive chance to check out the lyric-video for the "Sabre & Torch" below.

"SPACE POLICE" COLLECTOR'S EDITION TO CONTAIN PHOTOGRAPHIC HISTORY
On April 18th the new EDGUY album "SPACE POLICE - Defenders Of The Crown" is going to be released. Besides the standard edition there will be a Digibook 2CD edition and a Deluxe Earbook version featuring 2 CDs, a 56 page book (with more than 130 photos from the band's archives, many of them previously unseen), liner notes & illustrations. Check out this version here!
Share

EDGUY RETURN TO SLOVAKIA
On April 18th Edguy will release their brand-new studio album "Space Police - Defenders Of The Crown". Now the "Space Police" has been confirmed to return to Slovakia and headline Rock Pod Kamenom in Snina on August 9th. Later in September the band will head to England before the contintental European tour is going to kick off in September. Check the tour section for details!
Share

EDGUY CONFIRM UK TOUR
After having played the prestigious Download Festival, Donington two years ago Edguy have just been confirmed for a tour of England in support of their forthcoming 10th studio album “Space Police - Defenders Of The Crown“ (out on April 18th/ UK on the 21st/ North America 28th). Early September the band will head over for three shows in London, Nuneaton and Manchester. Their tour of continental Europe will kick off in Hamburg on September 19th. Check the tour section for further details!
Share

JENS, DIRK & EGGI TO APPEAR AT FRANKFURT MUSIC FAIR
On March 14th at 3:00 PM Jens Ludwig, Dirk Sauer & Tobias "Eggi" Exxel will make an appearance to meet you, greet you and sign autographs at the booth of Gibson Guitars at the Music fair in Frankfurt. Don't miss the opportunity to see them and say "hi"!
Share

NEW EDGUY ALBUM "SPACE POLICE" - MORE DETAILS REVEALED!
On April 18th the new EDGUY album "SPACE POLICE - Defenders Of The Crown" will be released worldwide. Besides the regular CD edition the album will also be available as a limited digibook edition containing 2 CDs. Also available will be a strictly limited hardcover earbook collectors' edition (28.5x28.5cm) containing the two discs, a photographic history with more than 130 photos from the band's archive, liner-notes, touring history, etc. More details will be revealed soon. We'll keep you updated here and let you know where and when to pre-order the collector's edition to make sure you get one! If you register with a valid email address, we'll keep you informed.

The album's tracklist reads as follows: Sabre & Torch, Space Police, Defenders Of The Crown, Love Tyger, The Realms Of Baba Yaga, Rock Me Amadeus, Do Me Like A Caveman, Shadow Eaters, Alone In Myself, The Eternal Wayfarer

The limited edition will come with a special collector's artwork: 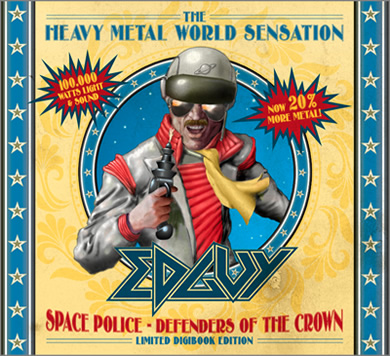