August 22, 2011
"THE REST OF THE WORLD CAN KISS MY..."
Interview with Tobias Sammet
On August 26th Edguy will release their new album AGE OF THE JOKER. As with every release from Edguy and Avantasia, the new album seemingly divides critics of the bands into two groups.  Friends of brave, anthemic and well produced Heavy Metal that's difficult to categorize are celebrating the album as the strongest Edguy release of the past ten years.  Of course on the other hand ever-complaining Edguy haters will remain unsatisfied with the new material on AGE OF THE JOKER.  The fact that the limited edition has been number one in the Heavy Metal sales charts on Amazon for weeks and the fact that the first run has now sold out completely proves that controversy doesn't do any harm to the ever-growing success of Edguy. In the following conversation with Edguy.net Tobias Sammet suggests every Edguy fan should check out the album themselves so they can form their very own opinion on the new album. Furthermore he says in a pretty honest way what he thinks about his critics...

Harmon Caldwell, Edguy.net: Tobias, let's talk about song writing process for the new album AGE OF THE JOKER.  How do you manage to jump out of AVANTASIA, a project that is mostly conceptual from start to finish, and directly into writing new EDGUY songs?

Tobias: "After I had finished my last AVANTASIA studio venture, it was obvious to me that this was as good as it gets in my world of music. After such an undertaking you are burned out, because you feel you have said everything. But after a while there is always an instinctive urge to compose new material. Not because I wanna compete with my past, but simply to be creative and have a good time coming up with great melodies in my little magical world at home. I do not think of the past or a certain goal when composing, and as much as fans would want it, I do not think of them either. I just wanna have a great time creating music, be it with EDGUY or AVANTASIA. The creative process is similar for both projects, only with AVANTASIA I have to be aware that it fits to a whole concept and the different singers involved. Also, with Avantasia I do not have to care what four other people say, in Edguy there are discussions at times."

HC: In a certain way the cover art for the new album could remind one of the MANDRAKE cover or other elements from EDGUY’s past.  How does the Joker play into the theme for the new album, and where did the new cover idea come from?

Tobias: “The jester has always been our trademark, not because he wants to be funny, but because he has the ultimate freedom to say anything he wants and he gets away with it. We have said anything you must not say, we have worn anything you must not wear, we have done anything you must not do according to the great book of rules in Heavy Metal. Yet we have ploughed our way to well over 2 million discs sold and played to thousands of fans in 40 countries around the globe. That's not a bad start for a band that's never been taken seriously by the majority of the press? We have always been true to ourselves, even if record label people may have freaked out over certain decisions we've made. If you take yourself too seriously you may end up with a heart attack in this crazy Metal business. That's why we have always kept a tongue-in-cheek attitude. We are allowed to go where no other band goes, and our fans know pretty well what and why we‘re doing this."

HC: It’s now been three years since the release of Edguy’s last album TINNITUS SANCTUS.  Surprisingly, the album seemed to receive mixed reviews from both fans and critics.  When writing a new album (AGE OF THE JOKER) what do you take away from past reactions?  Is there ever the temptation to let those opinions affect your songwriting or at this point in your career do you simply do exactly what you want to do?
Tobias: “No! Because what do other people know? There is only one target when writing a new album: I wanna enjoy the working process and create music that excites me! The fact that certain magazines bash whatever we do is no big news, we know what they'll write even before we enter the studio. As a matter of fact, we don‘t fit in their scheme, but down the line it really doesn't matter what some desk- or internet-hero writes. AGE OF THE JOKER seemingly has all our trademarks and is considered a back-to-the-roots album by some press guys, which theoretically could be a proof that we have our own signature sound which makes us proud, but nothing was forced. I also love TINNITUS SANCTUS, it is a great album, my favorite Edguy album to date. It's sad some people didn't understand it and I respect that. But this is not proof for inferior quality. What counts is that AGE OF THE JOKER is a great album, you know that, the EDGUYs know that, our producer Sascha Paeth knows that, and our fans will find out shortly. The rest of the world can kiss my ass!"

HC: One immediate difference between the two albums is the style of the first single song chosen.  Whereas MINISTRY OF SAINTS had a heaver, grittier, and darker edge, the new single and video, ROBIN HOOD seems to harken back to the more carefree EDGUY attitude from past albums.  What was the motivation for choosing ROBIN HOOD as the first single from AGE OF THE JOKER?

Tobias: "We had this great song, a serious song featuring some tongue-in-cheek moments and hilarious lyrics, and although it's a lengthy track the label thought it would be great to have a video clip. So who am I to get in the way of such an opportunity, running through the forest and playing Robin Hood with your friends, and having someone else pay for it. So we edited the song down to five minutes for a single version which kind of sucks, because now the song structure is shit, but it was the only way of making it a reasonable single and do the video."

HC: So let’s talk about Robin Hood for a moment.  What was your motivation for writing a song about this particular figure?

Tobias: "Attila the Hun, Odin, the sons of Odin, Cinderella, Humpty Dumpty... I can hardly think of a more or less historically relevant swashbuckler who hasn't been the main topic in a song, sung by Heavy Metal men in furry loin cloths. Except from Robin Hood, maybe the story of Robin Hood is too complex, haha! I just thought it is so over-the-top, it embraces everything that Rock and Metal are all about. It's more Spinal Tap than Spinal Tap ever were. Now, every child knows the tale of Robin Hood, everybody's seen the Errol Flynn movie. It's an enchanting topic, and still I think that there is too much romanticizing about him. Why? At the end of the day Robin Hood wants all people to be equal, while he wants to remain their leader, he steals from the business class and gives it to the lazy ones in coach. And he hides in the bushes to attack sharp dressed doers in the fast lane of the main road, just like those people on online message boards, that attack us, hiding their identity behind nick names. To me Robin Hood doesn't seem like a spokesman of moral values, I see him more as a medieval forest-version of Erich Honecker!" 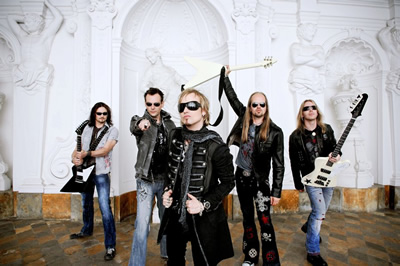 HC: Early reviews from the press are already calling AGE OF THE JOKER one of the best EDGUY albums ever.  What would you attribute that to and do you think it’s simply the high level of songwriting present on the new record?

Tobias: "You always give your best and as I said I especially love ROCKET RIDE and TINNITUS SANCTUS. A lot of people say we've gone back to the roots with AGE OF THE JOKER, and I scratch my head and go: "What?!" I think the songwriting on our new album is superb, the performances are great, we have the best guitars that we've ever had. I think many of the melodies are outstanding, but we didn‘t change anything on purpose, except maybe for the sound. We wanted to have a dynamic, old-school sound, but musically, we just let it happen. Our record label just sent me some press quotes saying, that this is the best album since MANDRAKE. Well, if they say so, then we gotta believe it, it's the press. I'd just call it the best album since the invention of electricity and nothing else!"

HC: Are there any songs that stand out to you as being the best from the album?

Tobias: "I love PANDORA'S BOX, but if you‘d ask me tomorrow I might mention a different song.  It's a very balanced album, and I think all the songs have very strong moments. But at this moment I truly love PANDORA'S BOX. At first listen it may seem to be a softer song, but it‘s got many powerful moments and it‘s so honest, it's fragile, angry, tongue-in-cheek, anthemic, big and epic. It's EDGUY and AEROSMITH and all different kinds of things melded together as one."

HC: And what about the upcoming AGE OF THE JOKER European tour?  It seems that the last few EDGUY tours have simply been getting bigger and bigger.  Do you have anything special planned for this time out?

Tobias: "Of course, we have a real crazy plan, but I can't tell you about it at this point as our engineers are working on it and they have to find out yet, if it‘s technically possible or not. But the tour will be big, we have only announced the first leg of the tour, more dates will follow next year, we‘ll visit the whole world. Now go and get the album, it‘s worth it."
Share
< Return to news
Tweets by @edguy
Open Sesame
Wrestle the Devil
Ravenblack
Love Tyger
Sabre & Torch Lyric Video
UP